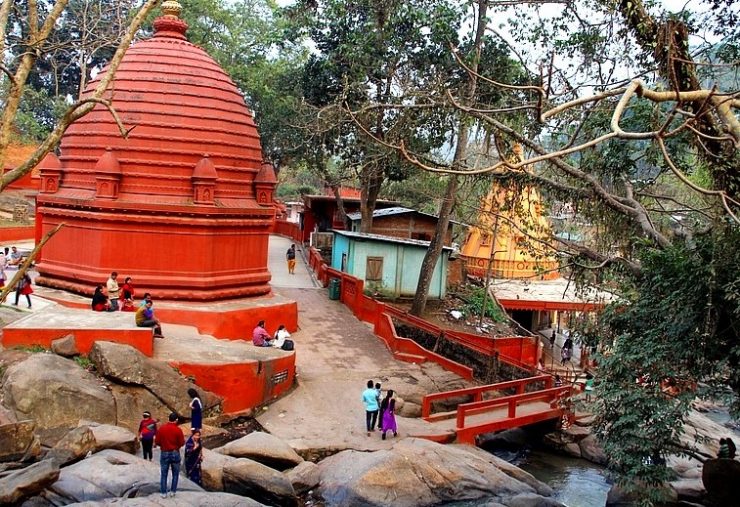 Assam has a great influence of Hinduism and one can find many temples in Assam. The various kings who ruled Assam have built various temples to show their gratitude towards their deities and built temples in honour of them. Guwahati particularly has many temples and has been bestowed as ‘the Temple city’.

Basistha temple or Baistha ashram is one of the temples located in Guwahati city. The temple is located in the Beltola area in Guwahati and is a major tourist puller to the state of Assam. The temple/ashram has a land of 835 bighas and stands in the bank of the river Basistha with a calm and serene environment with natural beauty. The temple has various terracotta and stone figures throughout the temple. Inside the temple a cave is located where Maharishi Basistha used to live. There is also a waterfall in the Ashram premises.

The Basistha temple which is located on the south-east corner of Guwahati was constructed by the then Ahom King Rajeswar Singha in 1751-1769 AD. The temple is essentially a Shiva temple and the history of the temple dates back to the Vedic Age. The ashram is believed to belong to Maharishi (great saint) Vashistha who is mentioned in the great Hindu epic- Ramayana. It is believed that the great saint brought an end to his life at this ashram.

Various devotees from all over the country flock to this place to worship in this place where the great Saint laid down his life.

Basistha temple, located in the south-east corner of Guwahati city is a Shiva mandir constructed by Ahom King Rajeswar Singha in 1764 along with gift of land 835 Bighas for the ashram. The history of the Basistha Ashram where the temple is located dates back to the Vedic age. According to legend the ashram was founded by the great saint Basistha (Vasishtha).

Temple in the ashram stands on the bank of the mountain streams originating from the hills of Meghalaya, which becomes the rivers Basistha and Bahini/Bharalu flowing through the city.

This ashram is believed to be the home of famous sage Basistha, also known as “Vasishtha”. The ashram is located a few kilometers (10-12) from Guwahati, on the outskirts of Garbhanga reserve forest which has an ample population of elephants. This Garbhanga reserve forest is also a proposed butterfly reserve. Although the ashram has a temple butstill the cave in which the Muni Vasistha is believed to have meditated is located 5 km inside the ashram. The ashram also has a waterfall.