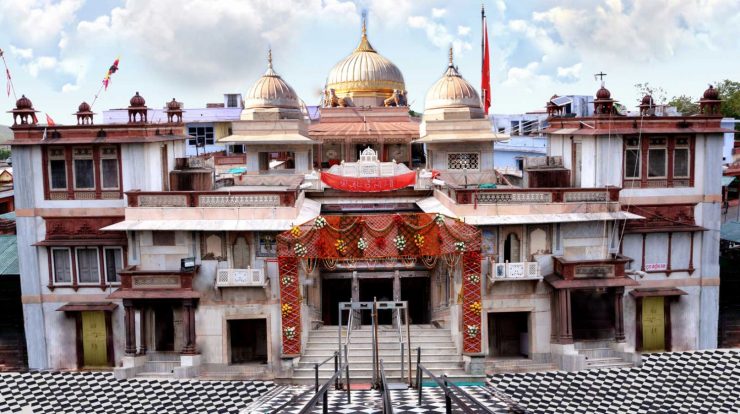 Kaila Devi Temple is a Hindu temple situated in the Kaila Devi Village of Karauli district, in the Indian state of Rajasthan.Nearest cities is Karauli (23 km), Gangapur City (34 km), Hindaun City (58 km). The temple is located on the banks of the Kalisil River, a tributary of the Banas River in the hills of Aravali.

The temple is dedicated to the tutelary deity, Goddess Kaila Devi, of the erstwhile princely Jadon Rajput rulers of the Karauli state. It is a marble structure with a large courtyard of a checkered floor. In one place are a number of red flags planted by devotees.

The annual fair of Kaila Devi is held at the village Kaila Devi in the month of Chaitra (Mar-Apr), lasting for a fortnight. Another attraction is the small temple dedicated to Bhairon, situated in the courtyard and facing the shrine of Kaila Devi is a temple of Hanuman locally called ‘Languriya’.

Approximately 20,00,000 devotees mainly from Uttar Pradesh, Madhya Pradesh and Rajasthan states gather during the fair in Hindu ‘Chaitra’ month. The ritual of Kanak-Dandotis is observed by staunch devotees. They cover a distance of 15 to 20 km to reach the temple, not on foot but by lying prostrate, making lines with their hands in that position, advancing up to the line drawn and repeating this procedure till they reach the temple.

While some eat food and take rest during the journey, others endure the rigors of the ritual without these.

Groups of meenas(Jorwal & Jagarwar gotra) arrive in a spirit of gaiety dancing, singing and creating a lively atmosphere. The spacious courtyard becomes the venue for dances and songs sung in praise of the guardian deity.

Gangapur city is the nearest major rail-heads of the Western Railway near Kaila Devi.and hindaun & Mahaveer ji another minor stations for site.The site is approachable by well maintained roads from Karauli, Hindaun City, Gangapur city and Shri Mahavirji. During the fair, the State Transport as well as private operators provide hundreds of bus services and thousands of other vehicles keeping in mind the huge inflow of pilgrims.

The Katare’s is a very respected clan in Hindus. They are the descendants of Maharishi Vasisth who was the guru of Lord Rama. They regards Kaila mata as their Kul Devi. Gupta, Mathur, Vaishya and all found in North India and Pakistan regard the Goddess as their Kul Devi.

This temple consist of the palace of the Maharaja in its background. Maharaja Shri Krishna Chandra Pal and his family used to come here on the big occasions and every Austmi.