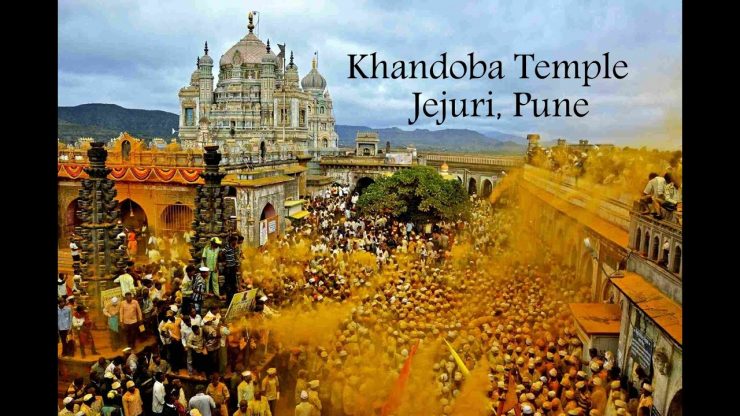 Contents hide
1 About Khandoba Temple
2 History
2.1 Shri Kshetra Ganagapurdatta Temple Read More
3 How to reach
3.1 Share this:
3.2 Like this:
3.3 Related

Jejuri is a city and a municipal council in Pune district in the Western Indian state of Maharashtra. It is famous for the main temple of Lord Khandoba. 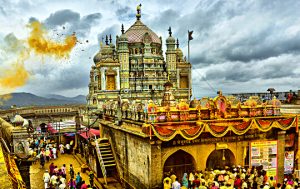 Khandoba also is known as Martanda Bhairava and Malhari is a Hindu god, worshipped as a form of Shiva, mainly in the Deccan plateau of India, especially in the states of Maharashtra and Karnataka. He is the most popular Kuladaivat in Maharashtra. He is also the patron deity of warrior, farming, herding as well as some Brahmin (priest) castes, the hunters, and gatherers of the hills and forests. The cult of Khandoba has linkages with Vaishnava and Jain traditions and also assimilates all communities irrespective of caste, including Muslims. Khandoba is sometimes identified with Mallanna of Andhra Pradesh and Mailara of Karnataka.

The worship of Khandoba developed during the 9th and 10th centuries from a folk deity into a composite god possessing the attributes of Shiva, Bhairava, Surya, and Karttikeya (Skanda). He is depicted either in the form of a Lingam or as an image of a warrior riding on a bull or a horse. The foremost center of Khandoba worship is Jejuri in Maharashtra. The legends of Khandoba found in the text Malhari Mahatmya and also narrated in folk songs, revolve around his victory over demons Mani-Malla and his marriages. The name “Khandoba” comes from the words “khadga” (sword), the weapon used by Khandoba to kill the demons, and “ba” (father). “Khanderaya” means “king Khandoba”. Another variant is “Khanderao”, where the suffix “Rao” (king) is used. In Sanskrit texts, Khandoba is known as Martanda Bhairava, a combination of the solar deity Martanda and Shiva’s fierce form Bhairava. The name “Mallari” or “Malhari” is split as “Malla” and “ari” (enemy), thus meaning “enemy of the demon Malla”. Malhari Mahatmya records Martanda Bhairava, pleased with the bravery of Malla, takes the name “Mallari” (the enemy of Malla). Other 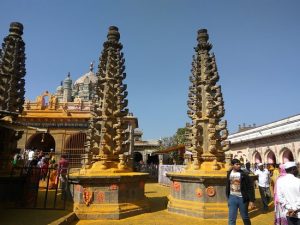 variants include Malanna (Mallanna) and Mailara (Mailer). Other names include Khandu Gavda, Mhalsa-Kant (“husband of Mhalsa”), and Jejurica Vani. Legends of Khandoba generally tell about the battle between the deity and demons Malla and Mani. The principle written source of the legend is Malhari Mahatmya (Mallari Mahatmya), which claims to be from the chapter Kshetra-Kanda of the Sanskrit text Brahmanda Purana but is not included in standard editions of the Purana. R.C. Dhere and Sontheimer suggest that the Sanskrit Mahatmya was composed around 1460-1510 AD, mostly by a Deshastha Brahmin, to whom Khandoba is the family deity. A version is also available in Marathi by Siddhapal Kesasri (1585). Other sources include the later texts ofJayadri Mahatmya and Martanda Vijaya by Gangadhara (1821) and the oral stories of the Vaghyas, bards of the god. The legend tells of the demon Malla and his younger brother Mani, who had gained the boon of invincibility from Brahma, creating chaos on the earth and harassing the sages. When the seven sages approached Shiva for protection after Indra and Vishnu confessed their incapability, Shiva assumed the form (Avatar) of Martanda Bhairava, as the Mahatmya calls Khandoba, riding the Nandi bull, leading an army of the gods. Martanda Bhairava is described as shining like the gold and sun, covered in turmeric, three-eyed, with a crescent moon on his forehead. The demon army was slaughtered by the gods and finally, Khandoba killed Malla and Mani. While dying, Mani offers his white horse to Khandoba as an act of repentance and asks for a boon. The boon is that he be present in every shrine of Khandoba, that human-kind is bettered and that he be given an offering of goat flesh. The boon was granted, and thus he was transformed into a demigod. Malla, when asked by the deity if he asked for a boon, asks for the destruction of the world and human flesh. Angered by the demon’s request, Khandoba decapitates him, and his head falls at the temple stairs where it will trample by devotees’ feet. 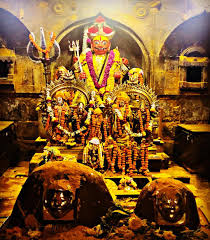 The legend further describes how two Lingas appeared at Prempuri, the place where the demons were killed. Oral stories continue the process of Sanskritization of Khandoba — his elevation from a folk deity to Shiva, a deity of the classical Hindu pantheon — that was initiated by the texts. Khandoba’s wives Mhalsa and Banai are also identified with Shiva’s classical Hindu wives Parvati and Ganga. Hegadi Pradhan, the minister and brother-in-law of Khandoba and brother of Lingavat Vani Mhalsa. the faithful dog that helps Khandoba kill the demons, the horse has given by Mani, and the demon brothers are considered avatars of Vishnu, Krishna, Nandi, and the demons Madhu-Kaitabha respectively. Other myth variants narrate that Khandoba defeats a single demon named Manimalla, who offers his white horse, sometimes called Mani, to the god. Other legends depict Mhalsa (or Parvati) and Banai or Banu (or Ganga) as futilely helping Khandoba in the battle to collect the blood of Mani, every drop of which was creating a new demon. Finally, the dog of Khandoba swallows all the blood. Sometimes, Mhalsa, or rarely Banai, is described as seated behind Khandoba on the horse and fighting with a sword or spear.

The legends portray Khandoba as a king who rules from his fortress of Jejuri and hold court where he distributes gold. Also, king Khandoba goes on hunting expeditions, which often turn into “erotic adventures”, and subsequent marriages. Khandoba is also a figure of respect and worship to Muslims, and this affiliation is visible in the style of his temples. He is called Mallu or Ajmat Khan (Rautray) by Muslim devotees, and many times portrayed as being a Muslim himself in this context. The latter is believed to conferred upon by the Mughal invader king Aurangzeb, who was forced to flee from Jejuri by Khandoba’s power. Some of these distinguishing Muslim features include his usual appearance as that of a Paá¹­hÄn on horseback, one of his wives being a Muslim, and that his horse-keeper is a Muslim in Jejuri. The MÄrtaá¹‡á¸a Vijaya expressly states that his devotees are mainly Muslims. The worship of Khandoba had received royal patronage by Ibrahim II, which consisted of the reinstatement of the annual Jatra and the right of pilgrims to perform rituals at the Naldurg temple. Malhari Mahatmya even records Muslims (mleccha) as the god’s bhaktas (devotees), who call him as Malluka Pathan or Mallu Khan. In Jejuri, a Muslim family traditionally looks after the horses of the god.

By Train: The nearest Railway station is Jejuri Sation.

By Road: From Pune Jejuri is 45Km. Traveler can access the temple via local Public transport or by private cab or car