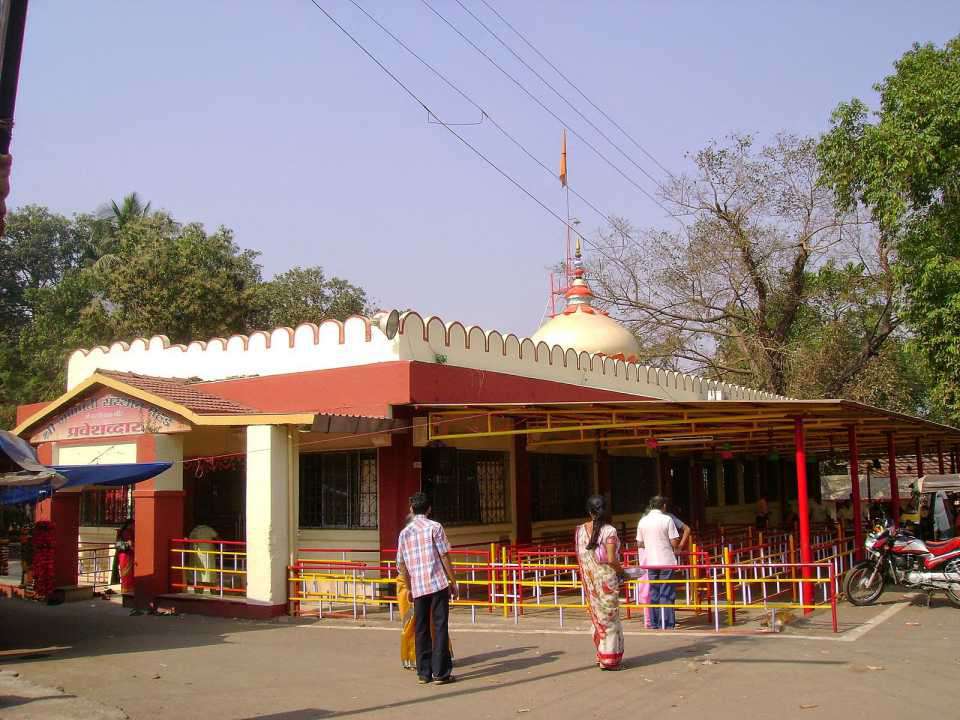 Mahad Ganpati Temple or Varad Vinayak also spelled as Varadavinayaka, is one of the Ashtavinayak temples of the Hindu deity Ganesha. It is located in Mahad village situated in Khalapur taluka near Karjat and Khopoli of Raigad District, Maharastra, India.

The temple is very simply designed with a tiled roof, a dome 25 feet high with golden pinnacle and a golden summit (Kalas) which has a carving of a cobra (also a deity revered by Hindus). The Temple is 8 feet long & 8 feet broad.

The original idol of Varad Vinayak can be seen outside the sanctum. Since the idol was in a badly weathered condition, the temple trustees immersed that idol & consecrated a new idol in that place. However, such a decision of trustees was objected to by few people & a suit was filed in the district court. The result of this case is still awaited. Now two idols, one inside the sanctum & one outside the sanctum can be seen. The sanctum made up of stone & surrounded by beautifully carved stone elephant carvings, houses the idol.

Ganesha is said to reside here in the form of varied Vinayaka, the giver of bounty and success. This Ashta Vinayak shrine faces east (Purvabhimukh) and is enshrined in the sitting posture, with his trunk turned towards the left. The stone idols of Riddhi and Siddhi are seen in the sanctum. Lord Ganesha as Varad Vinayak fulfills all desires and grants all boons.

A Gomukh (meaning face of a cow) is seen on the north side of the temple from which flows the holy water. A holy pond is situated on the west side of the temple. This temple also has the idol of Mushika, Navagraha Devtas and Shivalinga.

Shree Dhondu Paudkar in 1690 A.D. found the swayambhu idol of Shree Varadvinayak in a lake. This idol was kept in a nearly goddess temple for some time. The famed Varad Vinayak temple was built in 1725 by peshava sardar Ramji Mahadev Biwalkar & he gifted this to the village. The structure of the temple looks like an ordinary house. The mysterious idol of lord Ganesh was found under the well behind temple, and this is the main center of attraction. There is a Gomukh towards nort, a visage of a cow from which flows the tirth holy water. A unique feature of Mahad Varadvinayak Temple is a lamp (Nandadeep) that is glowing continually since 1892 (107 years).

Legend has it that the childless king, Bhima of Koudinyapur and his wife met the sage Vishwamitra while they had come to forest for penance. Vishwamitra gave the king a mantra (incantataion) Ekashar Gajana Mantra to chant and thus his son and heir, prince Rukmaganda was born. Rukmaganda grew up into a beautiful young prince.

One day, on a hunting trip Rukmaganda stopped at the hermitage of Rishi Vachaknavi. The Rishi’s wife, Mukunda, fell in love at the sight of the handsome prince and asked him to fulfill her desires. The virtuous prince flatly refused and left the ashram. Mukunda became very lovesick. Knowing her plight, King Indra took the form of Rukmaganda and made love to her. Mukunda became pregnant and gave birth to a son Gritsamada.

In time, when Gritsamada learned of the circumstances of his birth, he cursed his mother to become the unattractive, thorny berry-bearing “Bhor” plant. Mukunda in turn cursed Gritsamada that a cruel rakshas (demon) will be born from him. Suddenly they both heard a heavenly voice saying, “Gritsamada is the son of Indra”, leaving them both shocked, but too late to alter their respective curses. Mukunda was transformed into the Bhor plant. Gritsamada, ashamed and penitent, retreated to the Pushpak forest where he prayed for a reprieve to Lord Ganesh (Ganapati).

Lord Ganesha was pleased by Gritsamada’s penance and offered him a boon that he will bear a son who would not be defeated by anybody other than Shankara (Shiva). Gritsamada asks Ganesh to bless the forest, so that any devotees who pray here will be successful, and also urged Ganesha to stay there permanently and asked for knowledge of Brahma. Gritsamada built a temple there and the Ganesha idol installed there is called Varadavinayaka. Today the forest is known as Bhadraka. This temple is now believed to be the temple at Mahad. Gritsamav is known as the creator of the Ganana Twam mantra.

It is said that if the coconut received as prasad during Maghi Chaturthi is consumed, one will be blessed with a son. Hence the temple is especially full with devotees during Maghi Utsav.