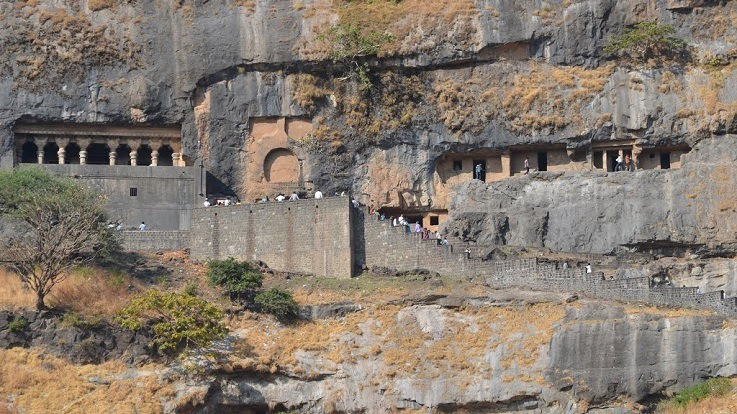 Contents hide
1 About Girijatmaj Ashtavinayak
2 Legend
3 Temple Architecture
4 Festivals and Puja
5 How to Reach
6 Share this:
7 Like this:
8 Related

Girijatmaj Ashtavinayak – Lenyadri Ganpati temple is the sixth Lord Ganesha Temple to be visited on the Ashta Vinayaka Mandir Pilgrimage. Located at Lekhan Hills, Girijatmaj Ashtavinayak Temple is the only temple of the Ashtavinayak which is on a mountain and is built in the locale of Buddhist Cave Temples. It is approached after climbing 307 steps. Out of 18 Buddhist caves on mountain, Girijatmaj Ganpati’s Temple is in the 8th cave. These caves are also known as Ganesh Gufa. Here, Lord Ganesh is worshipped as Girijatmaja. The Lord is believed to be his manifestation as an infant. Girija is another name for Goddess Parvati and Atamaj means ‘Son’.

Lenyadri is situated on the North-west bank of river Kukadi. Lenyadri carries an ancient myth which says that when the great Pandavas were living in agyatvas during their 13th year of exile, they sculptured these caves in just one night. The current name “Lenyadri” literally means “mountain cave”. It is derived from ‘Lena’ in Marathi meaning “cave” and ‘adri’ in Sanskrit meaning “mountain” or “stone”. The name “Lenyadri” appears in the Hindu scripture Ganesha Purana as well as in a Sthala Purana, in association to the Ganesha legend. It is also called Jeernapur and Lekhan parvat (“Lekhan Mountain”).

Lenyadri is one of the eight revered Ganesha temples collectively called Ashtavinayaka. While some believe that order of visiting the temples in an Ashtavinayak pilgrimage is irrelevant, Lenyadri is usually visited as the 6th temple.

Girijatmaja’s idol faces east. Parvati consecrated Ganesh idol in the cave wherein she had performed penances. Idol here is not a separate and distinct one. It has been carved on stone wall of the cave. Previously idol was covered with armour. Now, since the armour is fallen Girijatmaj’s idol with neck turned to left side can be seen. As such only one eye of the idol can be seen.

With a desire of having Vinayak as her son, Parvati performed penance for 12 years in the caves of Lenyadri. Ganapati was pleased and gave her the boon she wanted. On one Bhadrapada Shudh Chaturthi, Parvati scrapped the scraf from her body, mixed it with oil and ointment and formed an idol of Ganesh. She was performing pooja of that idol, suddenly the idol became alive and told Parvati that as desired by her he has taken Avatar in her house. On 11th day he was named Ganesh meaning a person who keeps three qualities Satva, Raja and Tama under control. Lord Shiv Shankar gave him boon that whosoever remembers Ganesh before starting a work, will successfully complete the work. Ganesh grew up for 15 years at Lenyadri. Demon king Sindhu who knew that his death is in the hands of Ganesh, sent demons like Krur, Balasur, Vyomasur, Kshemma, Kushal etc. to kill Ganesh on Lenyadri. Instead Ganesh killed all these demons in his childhood. Ganapati also performed many Balleelas in this place. Hence Lenyadri is considered holy place.

The caves date from between the 1st and 3rd century AD; the Ganesha shrine situated in Cave 7 is dated to the 1st century AD, though the date of conversion to a Hindu shrine is unknown. All of the caves arise from Hinayana Buddhism.

The Ganesha temple is located in Cave 7, the largest excavation around Junnar, about 100 feet (30 m) above the plains. It is essentially a Buddhist Vihara (a dwelling for monks, mostly with meditation cells) in design, an unpillared hall with 20 cells with varying dimensions; 7 on either side and 6 on the rear wall. The hall is large, can be entered by a central door, under a pillared veranda. The hall is 17.37 metres (57.0 ft) long; 15.54 metres (51.0 ft) wide and 3.38 metres (11.1 ft) high. There are 2 windows on either side of the entrance. The hall is treated now as a sabha-mandapa (“assembly hall”) of the Ganesha temple. 283 steps built (by devotees) in stone masonry over eight flights lead to the entrance. The steps are believed to represent sensual pleasures, which Ganesha has overcome. The veranda has six pillars and two pilasters (half-pillars) that support “an architrave from which projects eaves relieved with a railing resting on beams and rafters”. The pillars have octagonal shafts and “over benches and back rest and topped by an inverted ghata, compressed amalaka in between two square plates, inverted stepped pyramid and finally crowned by a bracket” with tigers, elephants and bulls.

In a later period, the two central cells of the rear wall have been combined by breaking the partition in between to house the Ganesha image. The old entrance was also widened during the conversion to the Ganesha temple. There are two other smaller entrances to the hall. All entrances bear marks of sockets for fixing wooden doors, added during the conversion, and still have doors. The hall also has traces of plaster and paintings, both added during the conversion and renewed in later times – possibly as late as the 19th century. The Gazetteer of the Bombay Presidency (1882) records that the hall was plastered and white-washed. The paintings depicted Ganesha’s childhood, marriage preparations, battle with demons and so forth, along with scenes of other Hindu deities like Devi, Krishna, Vishnu and Shiva. Some of the cells fitted with wooden doors were used for storage. Nine Sati memorials were added on the left wall during the conversion, each is in the shape of a long pillar with an arched top, and to the right of each pillar a hand raised above the elbow, with an open palm, signifies Sati’s blessing. While three panels were plain, the other memorials were sculpted. All of them are worn out, but one of them hints that its subject may be the immolation of Sati on her husband’s funeral pyre.

In front of the huge entry gates of Shri Girijatmaj Ganpati temple are enormous pillars with pictures of elephants, horses, lions and various other animals carved on them. Similarly there are pillars with different carvings in front of every other cave. The Sabhamandap of the temple is 60 feet wide with exactly 18 rooms of 7×10 feet2 area. These rooms, it is said, were used by saints for tapascharya. The neighbouring 6th cave and 14th cave have Buddha-pillars in them commonly known as Bouddha-Stupa. These caves are made into shape of hemisphere interiorly. That is why, echoes can be easily heard. That is why, these Stupas are also referred as the ‘Gol-Ghumat’s. The caves have carved pillars also alongwith the Stupas.

The Sabhamandap of Shri Girijatmaj Ganpati temple is 60 feet wide. The speciality of this Sabhamandap is that it is not supported by any pillar. It is in the form of a very large room. Outside the Gabhara (sanctum) of the temple rest carved pillars. The sanctorum (Garbhagraha) of the temple show-offs a wide range of astonishing art in the form of devotional paintings of Shri Guru Dattatray, Lord ganesh resting on Shiv-Parvati’s lap, Bal Ganesh playing ancient game like ludo made using natural colours. There is no electricity to light up in the temple. The temple is constructed such that during the day it is always lighted up by the sun-rays!

Major celebrations are held during the Bhadrapad (August – September) and Magh Chaturthis. In the month of Magh, an Akhand Harinaam Saptah is held. Ganesh Jayanti and Ganesha Chaturthi are celebrated in a great manner with cultural programs. Bullock cart racing is organized on this occasion.

The Panchamrit puja is conducted daily in the morning.

By Road: Lenyadri is about 94 km from Pune, on Pune – Nasik Highway and Junnar is the nearby town, which is 5 km from Lenyadri. State transport buses ply to Junnar from Pune and from Mumbai. From Junnar, rickshaws, jeeps and buses are available to Lenyadri. Palanquins are available for the devotees to reach the temple on hill top.