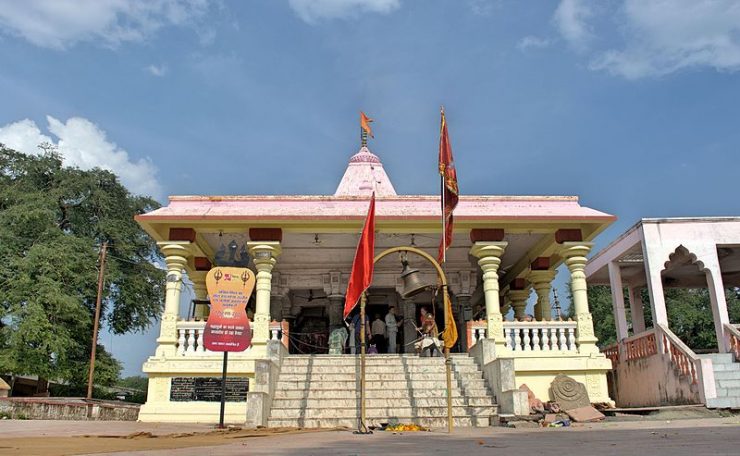 The KalBhairav temple is a Hindu temple located in the Ujjain city of Madhya Pradesh, India. It is dedicated to KalBhairav, the guardian deity of the city. Located on the banks of the Shipra River, it is one of the most active temples in the city, visited by hundreds of devotees daily. Liquor is one of the offerings made to the temple deity.

The present-day temple structure was built over the remains of an older temple. Images of Shiva, Parvati, Vishnu and Ganesha belonging to the Parmara period (800–1305 CE) have been recovered from the place. The temple walls were once decorated with Malwa paintings. However, only traces of these paintings are visible now.

The original temple is believed to have been built by an obscure king named Bhadrasen. It has been mentioned in the Avanti Khanda of the SkandaPurana. The present-day temple structure shows Maratha influence. According to the local tradition, after the Maratha defeat in the Third Battle of Panipat (1761 CE), the Maratha general MahadajiShinde offered his pagri (turban) to the deity, praying for victory in his campaign to restore the Maratha rule in North India. After successfully resurrecting Maratha power, he carried out restoration of the temple.

As the name suggests, the temple is dedicated to KalBhairav (or Kala Bhairava). The deity’s image is a face in form of a rock layered with kumkuma or vermilion. The deity’s silver head is adorned with a Maratha-style pagri, a tradition dating back to the days of MahadajiShinde.

The worship of AshtaBhairava (“eight Bhairavas”) is a part of the Saivite tradition, and the KalBhairav is considered their chief. The worship of KalBhairav was traditionally popular among the Kapalika and Aghora sects, and Ujjain was a prominent centre of these sects.

KalBhairav is the guardian deity of the Ujjain town:  he is considered Senapati (Commander-in-Chief or Chief General) of the town.

Liquor is offered to the temple deity as one of the five tantric ritual offerings known as panchamakara: madya (alcohol), maansa (meat), meena or matsya (fish), mudra (gesture or parched grain) and maithuna (sexual intercourse). In older times, all five offerings were made to the deity, but now only alcohol is offered; the other four offerings are in form of symbolic rituals.

Outside the temple, vendors sell baskets of offerings, containing coconuts, flowers and a bottle of liquor. In 2015, the State Government set up liquor counters outside the temple to ensure that the devotees are not swindled by unlicensed vendors of alcohol. The counters sell both country liquor and foreign liquor.

Every day, hundreds of devotees offer liquor to the deity. The devotees hand over the liquor bottles to the priest, who pours the liquor in a saucer. He then offers prayers and takes the saucer near the deity’s lips, which have a slit. He tilts the plate a bit, and the liquor starts disappearing. About one-third of the bottle is returned to the devotee as prasad.