Shrinathji Temple is a Hindu temple dedicated to Shrinathji in Nathdwara. It is considered an important pilgrimage center by Vaishnavs. Shrinathji is a form of Hindu god Krishna.

The divine form of Shrinathji is said to be self-manifested. The idol of Lord Krishna was being transferred to a safer place to protect it from the anti-Hindu, iconoclastic and barbarian destruction of the Mughal ruler Aurangzeb. When they were traveling, the wheels got stuck in the mud and wouldn’t budge. The priests thought of it as Lord’s own chosen place and accordingly, a temple was built there.

It is believed that Shrinathji traveled to Mewar many a time to play dice with a Princess by the name of Ajab Kauri. The princess expressed her feelings about how sad she felt when Shrinathji used to return home from Mewar. She wished that he would stay there itself and now, the palace is the current temple of Shrinathji. 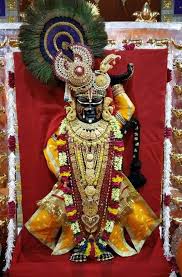 The economy and livelihoods in Nathdwara town revolve around the Haveli i.e the temple where the Mewar rulers lived. Shrinathji was quite popular with other medieval devotees, as well, as there were preachers who founded Shrinathji temples in present-day Pakistan, Russia, and other places on the Central Asian trade routes. Tradition holds that Shrinathji would return to Govardhan.

Devotees throng to the shrine in large numbers during occasions of Janmashtami and other festivals, like Holi and Diwali. The deity is bathed, dressed, offered meals, and the resting times in regular intervals. All this care is taken because the idol is believed to be of infant Krishna. 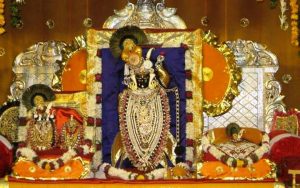 The main attractions are dressing and beautifying of the idol of Shrinathji which is changed seven times daily and the proper clothing pertaining to the different timings of the day is worn. The intricately woven shaneels and silk clothe have original zari and embroidery work on them, along with large quantities of real precious jewellery. Diya, incense sticks, flowers, fruit and other offerings, with local instruments and devotional songs of the Shrinathji, are seen as per the timings. One can view the idol after the curtain is removed and the idol is made available for view.

By Air: Nearest airport to Nathdwara is Udaipur, which is at a distance of about 60 km away.

By Train: The nearest railway station is Nathdwara

By Road: It is just about 50-55 KMS from  Udaipur. There are many buses also available.