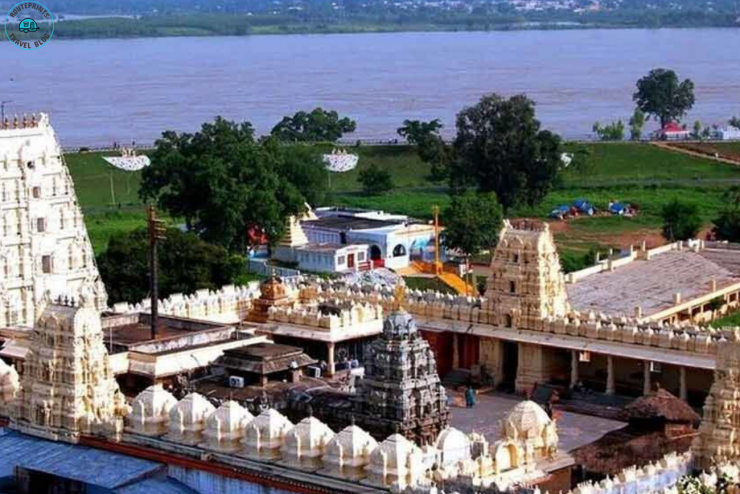 Lord Sree Sita Ramachandra Swamy Temple in Bhadrachalam is a Hindu temple of Lord Rama located in Telangana, India. The area is called asBhadrachalam and is the venue of grand celebrations on Rama Navami day, when the wedding anniversary of Lord Rama and his consort Sita takes place with much fanfare.

The temple in Bhadrachalam is closely connected with the life of the 17th-century saint composer Kancharla Gopanna who was known as Bhakta Ramadas. Gopanna was the Tahasildar of Bhadrachalam (second half of the 17th century), is said to have used money from the government treasury to build this temple, and was imprisoned in a dungeon at Golconda. Lord Rama is said to have miraculously given the Sultan the money spent by Gopanna, after which he was released. Gopanna then became Bhadrachala Ramadasa and went on to compose innumerable number of songs in Telugu in praise of Rama.

Bhadrachalam and Vijayanagara are sites said to have been closely associated with the Ramayana. Rama, Sita and Lakshmana are said to have stayed at Parnasala, 35 km away from Bhadrachalam. Rama is said to have crossed the river Godavari on his way to Sri Lanka to rescue Sita, at the spot where the Bhadrachalam temple stands, on the northern bank of the river. Legend has it that the son of Meru and Menaka, Bhadra, performed penances towards Rama here. Kabirdas, a Muslim by birth is also closely associated with this temple. It is believed that the images of the deities miraculously disappeared when Kabir was refused entry into the temple and that they reappeared miraculously upon his being permitted to enter.

Bhadrachalam attracts hundreds of thousands of devotees from all over the world. This hill place that is encircled by Holy River Godavari flowing towards southern direction is the famous shrine Bhadrachalam. The name is derived from Bhadragiri (Mountain of Bhadra: a boon child of Meru and Menaka). The history of this shrine stands for the significance of Ramayana Era, the coherent hill place existed in “Dandakaranya” of Ramayana period where Rama with his consort Sita and brother Lakshmana had spent their vanavasa. The vicinity of the temple had its incongruous mixture in another story which

depicts the exigency of “Sri Mahavishnu” to manifest himself as Rama and shuffled again to the mortal coil — long after Ramavatara was to fulfill his promise to his Bhakta Bhadra (a mountain king), a sage who had been continuing the intense penance to get grace of Lord Rama.

Kancharla Gopanna popularly known as Bhakta Ramadas constructed Bhadrachalarama temple. He was born to Linganna Murthy and Kamamba in Nelakondapalli village of Khammamett Taluk in the 17th century (1630 AD). As Tahasildar he was discharging his official duties earnestly and collecting revenues due to Nawabs in continuation of daily preaches: chanting of ‘Ramanama’ and the feeding the poor at his house. Ramadasa heard the news that the villagers of palvoncha paragana were proceeding to witness Jatara at Bhadrachalam. He, too, out of curiosity, visited Bhadrachalam. He found the deities in an amazing appearance; Ramadas then asked the villagers to contribute liberally for the construction of the temple. The villagers appealed to him to spend the revenue collections for the construction of the temple with a promise to repay the amount after harvesting the crops. As such Ramadas constructed the temple with Rs 6 Lakhs collected from the land revenues without the permission of the Golconda Nawab.

When the temple reached completion, he had a problem of fixing the ‘Sudarshana Chakra’ at the crest of the main temple. Deeply distressed he fell into sleep. On the same night, Rama in his dream asked him to have a holy dip in the river Godavari where he would find it accordingly. On the next day morning Gopanna did so and found holy Sudarshana Chakra in the river without much difficulty. He presumed that Sudarshana Chakra itself was shaped up with the divine power of his beloved God Rama. Soon after the construction, his miseries started. He was dismissed from service for misuse of revenue for constructing the temple, jailed for 12 years in Golconda Fort, and was tortured. Unable to withstand the miseries, Ramadas implored Rama to relieve him by singing many praising and emotional songs, which got popularized from the stanzas of ‘Dasaradhi Sathakam’ and ‘Keertanas’ of Bhakta Ramadasa.

The Golconda King Tanishah, the then ruler of Qutub Shahi Kingdom became a devotee of Rama who realized the devotion spirit of Ramadas after his imprisonment and took over the charge of temple administration. This resembles the communal harmony amongst the Hindus and Muslims.

The Golconda King, Tanishah realized Ramadas’s devotional spirit and dedication towards Rama, when Rama and Laxmana repaid six lakhs mohursexposing themselves as Ramoji and Laxmoji, the servants of Bhakta Ramadas to get release of their devotee from the imprisonment. Thanisha gave voucher to these divine looking persons who approached him at his house during late night. Then they kept the voucher under the pillow of Gopanna where he was jailed. Tanishah who woke up the next morning realized that those divine looking persons were none other than Rama and Laxmana and made arrangements to get release of Gopanna and prayed to forgive him by placing all the Gold Mohurs received last night at the feet of Gopanna. But, he refused to take back those mohurs except two as a mark of divine significance, and these two coins can still be seen in Bhadrachalam Temple.

Influenced by Lord Rama, Golconda Ruler Tanishah earmarked the income derived from the said Palwoncha paragana which came to Rs 20,000 and odd for the maintenance of the temple which was continued during Qutub Shahi’s reign and offering pearls on the occasion of Kalyana mahotsavam (SriRamanavami) to Deities on an elephant through a specially sent messenger. That procedure of sending pearls to the Deities is still followed by present state Government and continued to offer during SriRamanavami Festival.

Tumu Narsimha Dasa, Tahasildar of Palwoncha paragana, with his associate Varada Ramadasa came here from Guntur and took over charge of Bhadrachalarama temple after Ramadas made inscribed the performance of Nitya Poojas and sevas right from early morning “Suprabhata Seva” till night “Pavalimpu Seva” before closure of the temple as “Silaasaasanaalu” on these two pillars. This inscription gave details of daily dittam and daily rituals also.