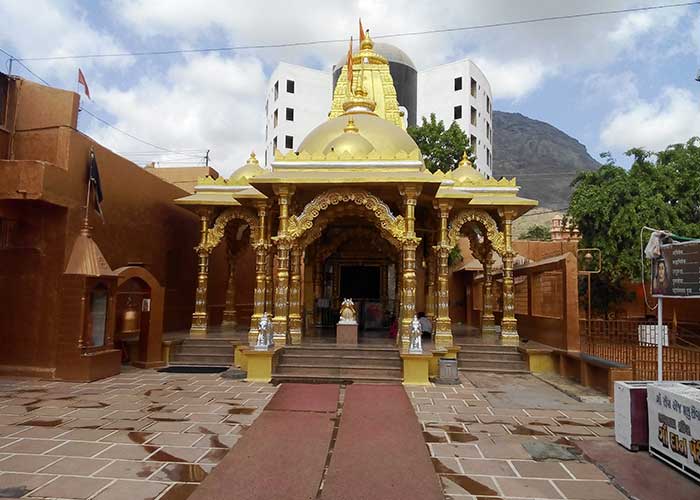 At a distance of 5 km from Junagadh Junction, Bhavnath Mahadev Mandir is an ancient Hindu temple situated at Bhavnath village near Junagadh. Located at the foothills of Mount Girnar, it is one of the most popular temples in Gujarat and among the top places to visit in Junagadh.

Bhavnath Temple in Junagadh is dedicated to Lord Shiva. The Shivling here is said to have emerged of its own divine intention. The Bhavnath Mahadev temple existence dates back to the ancient era and its story is found in the Puranic era. According to myth, once a while Lord Shiva and goddess Parvati were crossing the Girnar hills and then their divine garment fell over the present Mrigi Kund, making this place an auspicious site for Shiva worshippers. Even today, the naga bavas are known to bathe in the holy Mrigi Kund before joining the Mahashivaratri procession.

Visited by religious minded devotees all along the year, the shrine witnesses maximum footfalls on two religious occasions – during Maha Shivaratri and ‘Girnar Lili Parikrama’. On the occasion of ‘Maha Shivaratri’ that is held sometime towards the end of February or beginning of March, Bhavnath fair is organized for 5 days. The fair starts with a procession of ‘Naga Bavas’ (naked sages) seated on elephants, holding flags and blowing conch shells move towards the temple to participate in the Mahapuja performed at the midnight of Shivaratri. The naga sages before proceeding towards the Bhavnath Mahadev temple take a ritualistic bath in the Mrigi kund. It is firmly believed that Lord Shiva himself visits the shrine on this occasion.

In the month of October-November during the period of five days concluding on the full-moon day of Kartik Month ‘Parikrama’ is held after hoisting of Dhaja on this temple. The parikrama or circular travel goes on for five days, covering a distance of about 37 km around the Girnar Mountain. It has got very much importance and is compared to the Lili Parikrama of Govardhan mountain in Vraj. It is believed to be pious because Lord Dattatreya is believed to be staying on Mount Girnar for these five days and his devotees move around the Mount to pay their homage to Lord Dattatreya.

During Bhavnath Fair, pilgrims can get free meals at the fair ground. Under the painstaking initiative of Mathura and Ayodhya vendors several stalls are set up at the fair ground selling items such as rosaries, brassware, copperware, clay idols, utensils, foods etc. The management provides drinking water facilities, and several tea stalls for pilgrims and tourists who gather here during the fair.