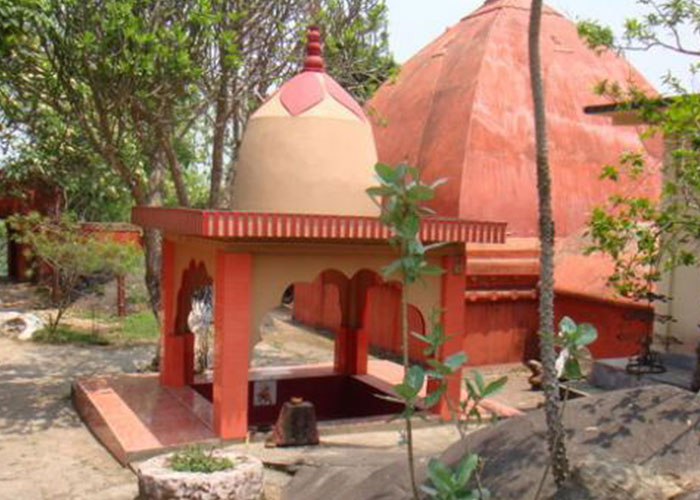 Dirgheswari Temple is a temple situated in the northern banks of the river Brahmaputra in Guwahati, Assam. Built by Ahom king Swargadeo Siva Singha, Dirgheswari temple is considered as a Shakti Peethas for Shakti Worship. Many ancient images made on rocks existed along with the temple. The main attraction of Dirgheswari temple is the annual Durga Puja celebrations, in which devotees from far of places use to attend.

Since ancient times, Dirgheswari was a prominent place of Worship for the followers of Shakti cult of Assam. It is said that when Sati, the first wife of Lord Shiva died, Lord Shiva, in his grief was carrying her dead body around the world. In order to pacify Shiva, Lord Vishnu and other Gods decided to get rid of the body of Sati, which had become a source of sorrow for Mahadeva. Lord Vishnu instructed his disc, Sudarshan Chakra, to cut the body of Sati into several parts. The Sudarshan Chakra acted as instructed, and the pieces of Sati’s body were scattered in different parts of the world. While her genitals fell in Nilachal Hill, on which the famous Temple of Kamakhya is situated, another body part of Sati fell in Sitachal hill. From that time onwards the place is considered sacred by the people.

It is also said that the great sage Markandeya, one of the immortals according to Hindu tradition, visited this place and started huge penance of Goddess Durga. At last the Goddess appeared before him and grants him blessings. Thus Dirgheswari became an important place of worship of Goddess Durga.

It is not known if any temple of Goddess Durga existed in Dirgheswari during ancient and early medieval period. The present temple at Dirgheswari was constructed by Ahom king Swargadeo Siva Singha reign 1714 CE-1744 CE, under the supervision of Tarun Duwarah Barphukan, the Ahom viceroy of Guwahati and Lower Assam.[1] The temple was constructed using bricks, at the top of the hill, which is filled with solid rocks. The Garbha-griha or the inner chamber of the temple, where the idol of Goddess Durga was present is located underground, in a small cave.

Lands were granted in the name of the temple and priests were appointed for the management of the daily functions of the temple. A rock inscription is present at the back entrance of the Temple in which the names of Ahom King Swargadeo Siba Singha and the Ahom Viceroy Tarun Duwarah Barphukan are present, issuing the royal order for the construction of temple and grants of lands in the name of Dirgheswari Temple. During the royal tour of Ahom king Swargadeo Rajeswar Singha in 1756 CE, the king visited the temple and granted more lands and men for the proper maintenance of the temple. The king also presented a silver Japi or hat, which is still used to cover the main idol of Devi Durga in the temple.