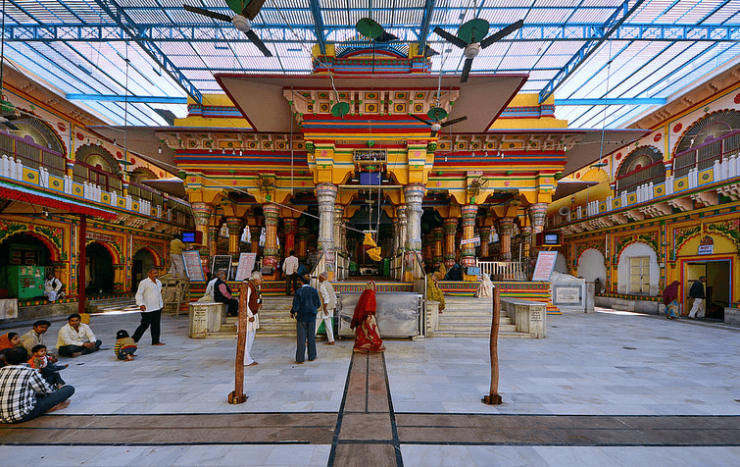 Contents hide
1 About Dwarkadhish Temple
2 Temple History
3 Architechture
4 How to Reach
5 Daily Poojas and Festivals
6 Share this:
7 Like this:
8 Related

Located in the North region of Mathura, Sri Dwarkadheesh Mandir is one of the oldest and largest temples in Mathura. A must visit on a Krishna Temple tour in Mathura, it is mainly known for featuring the black Marble idol named Dwarkanath, and white marble idol of his counterpart deity Sri Radharan. The courtyard of the temple is enclosed by a magnificently carved Rajasthani style entrance. In the central courtyard, rows of richly carved pillars are nicely lined up. Another small temple of Lord Krishna (Vishnu) Shaligram is also built up within the temple courtyard. To see the most happening side of this temple, you should visit here during the Sri Krishna Janmashtami.

In the war at Mathura, Sri Krishna had slew Kansa, who was his maternal uncle but was a cruel king ruling the city. Afterwards, he declared Ugrasen, the Kansa’s father, the king of Mathura. This was not accepted by the Kansa’s father-in-law (king of Magadha) and therefore, attacked Mathura 17 times. To avoid harming the people and assure their safety, Shree Krishna and the Yadavas moved to Dwarka.As told by Shree Krishna, Vishwakarma, a celestial architect, built the city on the banks of the Gomati river by reclaiming a piece of from the sea. At that time, Dwarka was popular by Swarna Dwarika (meaning golden gate due to full wealth and prosperity), Dvaramati, Dvaravati, and Kushsthali. It consists of six well-developed sectors, plazas, wide roads, residential and commercial zones, palaces, and many public utilities.Public gatherings used to happen in a huge hall named ‘Sudharma Sabha’. The city was a good business centre due to the recognition of a good harbor. There were 700,000 palaces in the city comprising of gold, silver, and gems. In addition, the city encompassed attractive flora gardens and lakes.

Dwarkadheesh Temple is one of the most visited shrines of Mathura. Built in 1814, Dwarkadhish Temple is said to have been constructed by Seth Gokul Das Parikh, who was the treasurer of the Gwalior Estate. He was a great devotee of Lord Krishna and erected the shrine to commemorate the deity. In the present day, Dwarikadhish Temple is administered by the followers of the Vallabhacharya sect.

The main shrine embraces the images of Lord Krishna and his beloved Radha. Apart from the image of Radha-Krishna, the shrine has images of other Gods of the Hindu Pantheon. The structure of the temple has the glimpse of local art and architecture. The interiors boast the excellent work of art, brilliant carvings and exquisite paintings.

By Road: The temple present in Mathura. We can reach the Temple easily by hiring auto, bus or taxi from anywhere in the Uttar Pradesh state or from neighboring state. The Uttar Pradesh State Transport Corporation (UPSTC), runs regulars bus service to the temple.

By Rail: The nearest Railway Station to the temple is Mathura Junction

By Air: The Temple can be reached through nearest Agra Airport(47 km) which is well connected with regular domestic flights to Delhi, Mumbai.

This temple Opening & Closing times is 6.00 AM and 9.30 PM. During this period major part of the Lord Krishna rituals are performed. Archana, Aarti and Abhisekham are the daily pujas performed.

In the vein of other Krishna temples, Janmashtami is the major festival that is celebrated with great enthusiasm in the temple. Besides Janmashtami, the much-awaited festivals like Holi and Diwali are observed with a whole-hearted celebration. People from all over the country come to this sacred shrine to receive the blessings from the Lord.