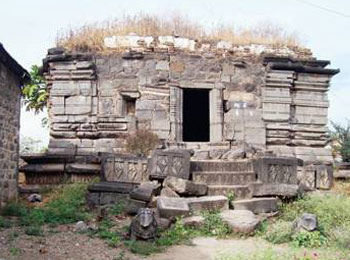 Contents hide
1 About Kadamba Devi Temple:
2 Location:
3 How To Reach Mahuli:
4 Temple Address:
5 Share this:
6 Like this:
7 Related

The Kadamba Devi Temple, believed to be from the late Shilahar period or the early Hemad-Panti (Yadav) period, is in a severe state of disrepair and has been taken up for restoration by the state archaeology department. It is about 12.19 metres (40 ft.) long by about 6.09 metres (20 ft.) broad and consists of a hall or Mandap with a shrine and vestibule, but without a spire. It is built of gray trap on a platform about 3.04 metres (ten feet) above the average level of the village streets. It is closely surrounded by mud houses and therefore seen to less advantage than many of the old temples which are usually found in vacant spaces and often outside the villages. It is raised on a stone plinth about 0.914 metres (three feet) high, the face of which is cut in a lozenge pattern. The walls are different from the usual type of Hemad-panti temples in the district being elaborately carved externally, specially the shrine wall.

The hall or mandap is 1.85 m2 (20 ft. square) and the walls reach to the roof not as usual left solely for support to the pillars. The line of the front or east wall is straight and contains a square entrance but is in bad repair, the carved work nearly defaced and everywhere blocked up with mud and stones put in to prop it up. The side walls, which also contain two square entrances, are as usual rather wider at the centre, the outline slightly resembling the cruciform. The stones are pointed in beaded and tooth work and floral decorations are faintly carved on them. The vestibule to the shrine is about 1.52×5.79 metres (five feet by nineteen). The shrine is star-shaped and about 4.57×6.09 metres (15’x20′) at the widest part.

At the west, north and south sides are flat faces connected by zigzags showing five corners. These walls are carved in much the same way as the hall or mandap walls but far more elaborately. The faces contain niches with images of deities fairly well executed. The image in the north niche is Mahisasur Devi riding on a buffalo and holding the child Parasurama in her lap, the image on the west is of Narsimha, the man-lion; and the image on the south is Ganapati and sadanana or Kartikeya. The roof has heavy caves of carved stone but scarcely projecting and modern brick parapet.

Mahuli is a village in Khanapur taluka 16.09 km (ten miles) north of Vite on the Vite-Mayani road. It has a remarkable temple dedicated to Kadamba Devi. The temple is in the centre of the village, though not easy to find out. It is partially in a dilapidated condition.

How To Reach Mahuli:

The nearest airport is Sambre Airport, Belgaum, Karnataka. There is no railway station near to Mahuli in less than 10 km. Sangli Railway Station (near to Sangli), Madhavnagar Railway Station are the Railway stations reachable from nearby towns. Vita, Sangli, Karad are the nearby by towns to Mahuli having road connectivity to Mahuli.