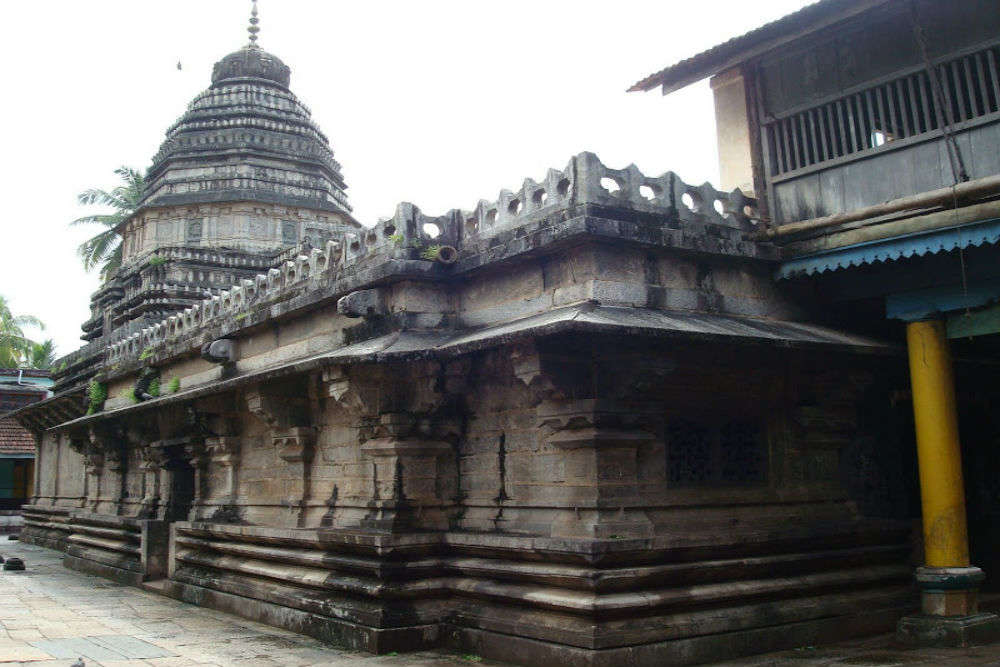 The Mahabaleshwar Temple, Gokarna is a  Hindu temple located in Gokarna, a Hindu religious pilgrimage centre in Uttara Kannada district in the Indian state of Karnataka.  A Pranalinga (Pranalinga is defined as “the reality of God which can be apprehended by the mind.”) also known as Atmalinga or Shiva Linga is deified in the temple, which is facing the city beach of the Arabian Sea in Gokarna.

The Shiva Linga has a hoary legend. It is said to bestow immense blessings to devotees who even glimpse it. The temple is considered as pious as the Shiva temple at Varanasi or Kashi in North India on the banks of the Ganges River and hence is known as the Dakshin Kasi (South Kasi). The temple, built in a classical Dravidian style of architecture, was first constructed by Mayurasharma of the Kadamba dynasty, who ruled between 345 – 365. This king wanted to gain knowledge of the Vedic rites and the Ashwamedha Yagna (a horse sacrificial ritual), so he travelled to Kanchipuram, a major learning centre, but on reaching there, was insulted by a horseman guard and angry, he swore to defeat the Pallava dynasty (the then ruling dynasty). Following their defeat, the king asked a few priests to perform a daily yagna to maintain his suzerainty over the region. His son, King Kangavarman brought more Brahmin families from different lineages to maintain administration at the temple.

Kalidasa mentions the “Lord of Gokarna” in his Raghuvamsha of the 4th century. The Gokarnam shrine is one of the Paadal Petra Sthalams of the 7th century Tevaram canon. Visvesvaraya of Halasunadu-Kundapura built the Chandrasala and Nandi pavilions when Queen Chennammaji and her son Soma sekharanayaka were ruling Keladi (1653-1671). The temple is a large complex of shrines and much of it belongs to the later Vijayanagara period. In 1665, Shivaji came here to worship the deity. According to the legend, the Atmalinga was perforce placed at Gokarna, in the temple precincts where it is now deified, by Ravana, the demon King of Lanka of epic Ramayana fame when he carried it from Mount Kailash in the Himalayas.

Pilgrims take a holy dip in the Arabian Sea before visiting the temple for worship. It is one of the seven sacred Muktikshetras or Mukthistala (place of salvation) in India where many Hindus of Karnataka perform obsequies (death rites) for their departed; six other Muktistalas in Karnataka are: Udupi, Kollur, Subrahmanya, Kumbasi, Kodeshvara and Sankaranarayana. The temple is located on the shores of the Karwar coast of the Arabian Sea in a green environment in the holy town of Gokarna, also spelt Gokarn, on the West Coast of India in Uttara Kannada or North Kannada district. Gokarna lies between the Gangavali and Aganashini rivers. National Highway 17 (NH17), a coastal highway on the western ghats of India (from Mangalore to Mumbai), passes close to the temple town of Gokarna. The town is 56 kilometres (35 mi) from Karwar and 252 kilometres (157 mi) from Mangalore on this highway.and town is 145 kilometres (90 mi) from Hubli. It is 450 kilometres (280 mi) from Bangalore and the nearest airport is at Panaji,Goa, 155 kilometres (96 mi) away. Vijayanagara Emperor visited the temple and weighed himself in gold here.

In 1665, Shivaji, after disbanding his army here, worshipped at the temple. In 1676, Fryer, the English traveller visited the place during Shivaratri festival and has written in detail about the festival at the temple. The religious practices observed by most devotees, who are accompanied by their priests, consists of first shaving their head, fasting and taking a bath in the Arabian Sea, opposite to the temple. Then, they pay obeisance to lord Ganesha(the elephant headed god) defied in the Shri Maha Ganapathi Temple, which is a few yards away from the Mahabaleshwar Temple. After observing all these religious procedures, devotees visit the main shrine of Mahabaleshwar for a darshan, with the fervent prayer that such a formal viewing of god would wash all their sins and usher prosperity in their lives.