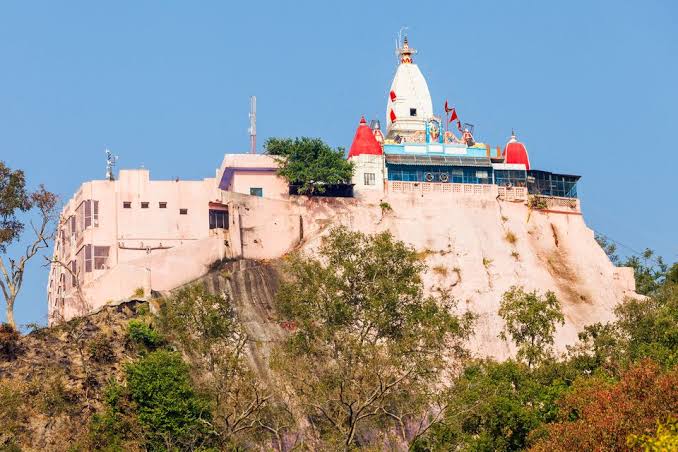 Mansa Devi Temple, Haridwar is a Hindu temple dedicated to goddess Mansa Devi in the holy city of Haridwar in the Uttarakhand state of India. The temple is located atop the Bilwa Parvat on the Sivalik Hills, the southernmost mountain chain of the Himalayas. The temple also known as Bilwa Tirth is one of the Panch Tirth (Five Pilgrimages) within Haridwar. The temple is known for being the holy abode of Manasa, a form of Shakti and is said to have emerged from the mind of the lord Shiva. Mansa is regarded as the sister of the NÄga (serpent) Vasuki. The term Mansa means wish and it is believed that the goddess fulfils all the wishes of a sincere devotee. Devotees who want their wishes to be fulfilled by Mansa tie threads to the branches of a tree located in the temple. Once their wishes are fulfilled, people come back again to the temple to untie the thread from the tree. Mansa is also offered coconuts, fruits, garlands and incense sticks in order to appease her. Mansa Devi Temple is a Siddh Peetha which are the places of worship where desires get fulfilled. It is one of three such Peethas located in Haridwar, the other two being Chandi Devi Temple and Maya Devi Temple.

The inner shrine has two deities installed, one with eight arms and the other one three headed with five arms. Mansa Devi Temple is an ancient temple that attracts people from both far and near due to its significance. The temple is considered a must visit for the pilgrims going to Haridwar. It enhances the holy tradition of Haridwar which persists in the place from many past centuries. It offers views of the River Ganges and the plains of Haridwar. To reach the shrine one has to either follow the trekking route up to this holy shrine or ride on the recently introduced rope-way service. The rope-way service known as “Mansa Devi Udankhatola” was introduced for the benefit of the pilgrims and it caters to the pilgrims also to the nearby located Chandi Devi shrine. The rope-way carries the pilgrims from the lower station directly to the Mansa Devi Temple. The total length of the rope-way is 540 metres (1,770 ft) and the height it covers is 178 metres (584 ft.). On a normal day, the temple is open between 8 am and 5 pm, except for lunch closings of 12 pm to 2 pm.

This temple along with the nearby located Chandi Devi temple is visited by thousands of devotees from various parts of the country, and especially during the Navratra and the Kumbha Mela in Haridwar. It is said that goddesses Mansa and Chandi, the two forms of goddess Parvati always reside close to each other. This belief can also be found true in other case since near to the Mata Mansa Devi Mandir in Panchkula, Haryana, there is a Chandi Mandir located nearby in Chandigarh. Maa Mansa, it is believed, fulfills the ‘manoutis’ and pilgrims make it a point not to miss offering prayers to the reigning deity in the form of Shakti.