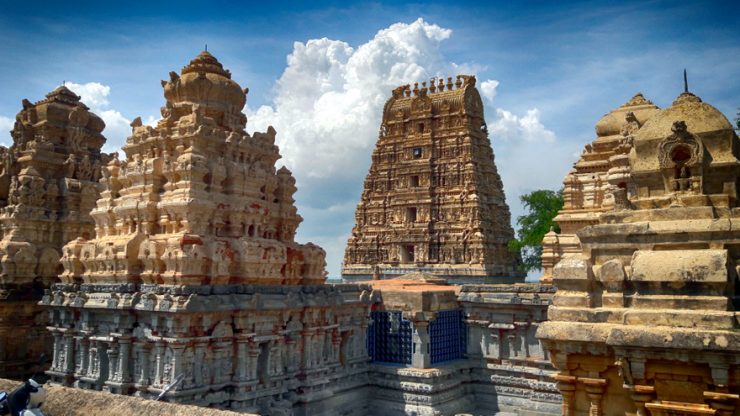 The Pushpagiri Temple Complex is situated in the Cuddapah district of Andhra Pradesh, India. It is located on the banks of the Pinakini River that meanders through the District which has origins on Nandi Hills in Karnataka and is located at a distance of about 16 kilometres from the district headquarters. 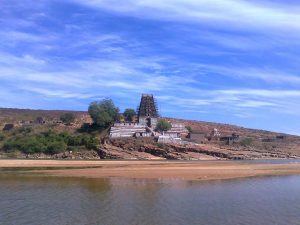 The name Pushpagiri derives from a local legend that that to extricate his mother Vinutha from the shackles of slavery of his stepmother Kadruva, Garuda has embarked on a journey to the heavens to conquer Lord Indra and fetch the holy nectar of Ambrosia. Garuda while returning from the heavenly abode passed by the hamlet then called – Kampalle, where he unintentionally spilt a drop into a local pond formed by the river Pinakini.

The pond immediately was granted divine powers of transforming back to their youth, all those that took a dip in it. Consequently, people began to throng the pond for the dip in its waters. Upon seeing this unprecedented miracle, the Devas approached God Vishnu who instructs Garuda to cover up the pond with a rock from a nearby mountain.

The megalith Garuda placed on the pond started floating like a flower – Pushpa in Sanskrit. To stop it from raising again, God Vishnu and God Shiva drove the rock under with their feet into the land. Thus the name Pushpagiri which in Sanskrit would mean a flowery mound.

The temple complex is located at 380 metres (1,000 ft) above the sea level and covers an approximate area of 7.5 square kilometres (2.9 sq mi). There is lush greenery surrounding the hamlets that include in the temple complex with crops watered from the rain as well as the river year round. 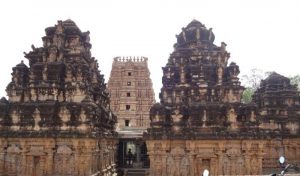 Despite the hot tropical summers in the region, there is always water in the area due to the underwater level butted by the river. Apart from the small arid mountainous area where the mound is supposed to have fallen, the entire region is full of greenery on all sides with plenty of crops mainly paddy.

During the rainy season, the area is quite a sight for the beholders. The river Pinakini flows from west to east, changing its course towards the south at Pushpagiri and soon after the hamlet of Sivalapalle, the river changes its course again to travel east finally opening into the sea in Nellore District.

Pushpagiri shares a tropical climate with the Cuddapah district as with the encompassing region of Rayalaseema. The summers are long and hot with temperatures ranging between 37 °C and 45 °C. The river almost dries up during the rainy season with water left only in some pools made by the previous flow. The summer will occur between the months of April and July.

With the onset of monsoons, the climate starts cooling down and the river swells up during the rains which could sometimes be very hazardous especially during the torrential rains in the months of August to October when the occurrence of hurricanes and low depressions are very common. The floods to the river can cause the swirling waters to precariously perch on the edges of the banks with all the river bed submerged.

The months between September and March are relatively cool, December being the coolest with a temperature averaging between 17 °C and 23 °C. This is the best time to visit the temples around and many people visit the area to perform spiritual pilgrimages as well as for sightseeing.

By Air: The closest airport is in Mangalore, at a distance of 135 km.
You can also visit Bangalore Airport which is located at 260 km. From there,you have to take a private taxi or bus to get to the point.

By Train: The closest Railway Station from Pushpagiri Wildlife Sanctuary is Mysore, at a distance of 146 km