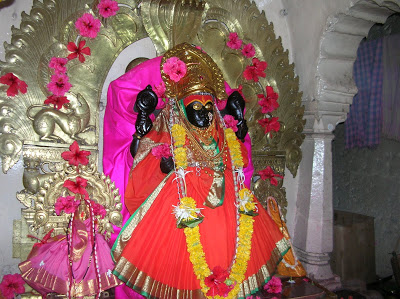 Bhuvaneshwari Bhilwadi, opp. audumbar Dattatreya Kshetra at Sangli District. Bhuvaneshvari is the Queen or ruler (feminine, Ishvari) of the universe or realm of beings (Bhuvana). She is the Divine Mother as the Queen of all the worlds. The entire universe is her body and all beings are ornaments on her infinite being. She carries all worlds as a flowering of her own Self-nature. She is thus related to Sundari and to Rajarajeshvari, the supreme Lady of the Universe. The Goddess represents space. Space is the Mother or Matrix in which all creatures come into being. She is the field in which all things grow. She is the receptive spirit who gives space to allow all things their place and function. She is the cosmic womb that gives birth to all worlds. As space, Bhuvaneshvari is complementary to Kali who is time; they are the two main faces of the Goddess as both the infinite and the eternal.

Bhuvaneshvari creates the stage on which Kali performs her dance of life and death. At the stage Bhuvaneshvari is also the witness, the observer and the enjoyer of the dance. As Kali creates events in time, so Bhuvaneshvari creates objects in space. All events are merely episodes in the Devine Mother Kali who is time. All places are merely phases of the dance of the Divine Mother Bhuvaneshvari who is space. The Goddess is the place, the field, the matrix in which we act to manifest the Gods. Knowing her as the ground on which we stand and the reality which pervades us, we gain the capacity (Shakti) to accomplish the highest actions, which are the practice of Yoga. Returning to her passive presence, we ourselves become the field in which the Gods, the cosmic powers, can be born and assume their roles in the cosmic creative unfoldment.

Bhuvaneshvari is the cosmos (Bhuvana) personified as Goddess. Worshipping her promotes a cosmic vision and absolves us from the narrowness of opinion and belief. She helps us go beyond all identifications with creed, class, race, sex, nation and religion, to a universal understanding. She gives us world vision, a global understanding, and a sense of the infinite. As the power that measures out the universe, Bhuvaneshvari is called Maya, which also means illusion. When things are measured we are in their limited forms and forget the underlying unitary space in which they appear. This is how illusion arises. All manifest forms are merely waves in the infinite space of the Divine Mother.

We must learn to see the space of the Mother, which is the embrace of consciousness, in all apparent objects of world, and no longer take their diverse forms as reality. As Kali is the power of Action (kriya-shakti) and Sundari is the power of Knowledge (jnana-shakti), Bhuvaneshvari is the power of Love (iccha-shakti). Love creates space and provides freedom. It does not limit or try to posses, which is the action of selfish desire. Yet the space of love is not an empty or unfriendly space, it is a space that nurtures and gives room to grow and flower. If love does not give space, it is not a Divine Love. Bhuvaneshvari has a form like Sundari, whom she resembles in many ways, which reveals her beneficent nature. She has the colour of the rising sun, with the crescent moon on her head, with four hands and three eyes. She holds in two hands the noose and the goad. With her other two hands she gives the gestures that grant boons and dispel fears. The mantra for Bhuvaneshwari is the single syllable Hirim. Hirim is one of the most important of all mantras. It is called the Devi Pranava, or the equivalent of Om for the Goddess. Hirem refers to the heart (Hridaya). It also relates to Hri, which is modesty. Bhuvaneshvari as the Mother can be worshipped through the mantra Ma, which is the natural sound for mother.