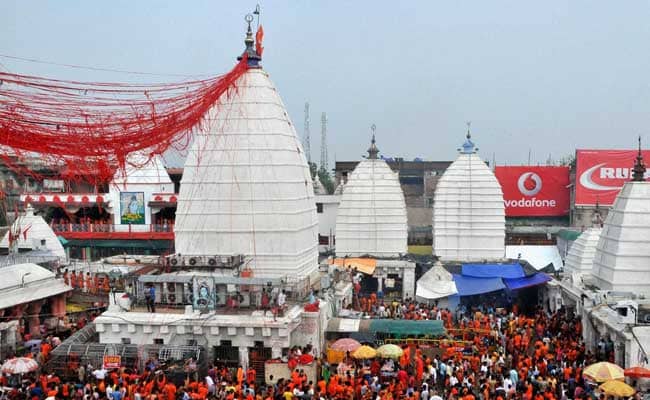 According to Hindu beliefs, the demon king Ravana worshipped Shiva at the current site of the temple to get the boons that he later used to wreak havoc in the world. Ravana offered his ten heads one after the another to Shiva as a sacrifice. Pleased with this, Shiva descended to cure Ravana who was injured. As he acted as a doctor, he is referred to as Vaidhya (“doctor”). From this aspect of Shiva, the temple derives its name.

This states that Vaidyanathjyotirlinga is located at Prajwalikanidhanam (meaning funeral place i.e., chithabhoomi) in the North-Eastern part of the country. Deoghar is far located in east compared to Parli which is in west central part of the country. Also Chidabhoomi indicates that, in olden days, this was a funeral place, where corpses are burnt and post-death ceremonies were performed. This place could have been a center of tantric cults like Kapalika/Bhairava where Lord Shiva is worshipped significantly as smasanvasin (meaning, residing in crematorium), savabhasmabhushita (meaning, smearing body with ashes of burnt bodies).

Narikhande is district abounding in thickets. It lies west of the Dwarikashwari River. It extends along the Panchakuta hills on its west, and approaches Kikta on the north. The forests are very extensive, chiefly of Sakhota, Arjuna and Sal trees with a plentiful addition of brushwood. The district is celebrated for the shrine of Baidyanath. The deity is worshiped by people from all quarters, and is the source of every good in the present age.”

It is believed that, Shiva first manifested himself as a Jyotirlinga on the night of the AridraNakshatra, thus the special reverence for the Jyotirlinga. Interestingly, the same shrine of Vaidyanath is considered as on of 51 Shakti Peethas, where ‘heart’ of Sati (goddess) fell, after being broken apart by the Sudarshana Chakra of Lord Vishnu, from the body of Dakshayani(Sati), carried by the love lorn, distraught Shiva, at the location on which the respective temple is built. Since the heart of Sati fell here, the place is also called as Hardapeetha. Here Sati is worshipped as Jai Durga (Victorious Durga) and Lord Bhairav as Vaidyanath or Baidyanath. Dakshayani was reborn as Parvati, daughter of Himavat, king of the mountains, and his wife, the Devi Mena.

The question of Pithas is associated with Devi Bhagwat, KubjikaTantra, KalikaRahasyam, MundmalTantra and Rudrayamalam etc. These Tantras mention this holy shrine as a popular Tantrik seat for Sadhakas. Famous scholar and Tantric GopinathKaviraj have mentioned Baidyanathdaham, as a seat of Tantric Sadhana. The religious importance of BaidyanathJyotirlingam should be based upon the facts of the Puranas and Tantras.

As per Shiv Mahapuran, once Brahma (the Hindu God of creation) and Vishnu (the Hindu God of preservation) had an argument in terms of supremacy of creation. To test them, Shiva pierced the three worlds as a huge endless pillar of light, the jyotirlinga. Vishnu and Brahma split their ways to downwards and upwards respectively to find the end of the light in either directions. Brahma lied that he found out the end, while Vishnu conceded his defeat. Shiva appeared as a second pillar of light and cursed Brahma that he would have no place in ceremonies while Vishnu would be worshipped till the end of eternity. The jyotirlinga is the supreme partless reality, out of which Shiva partly appears. The jyothirlinga shrines, thus are places where Shiva appeared as a fiery column of light. Originally there were believed to be 64 jyothirlingas while 12 of them are considered to be very auspicious and holy. Each of the twelve jyothirlinga sites take the name of the presiding deity – each considered different manifestation of Shiva. At all these sites, the primary image is lingam representing the beginningless and endless Stambha pillar, symbolizing the infinite nature of Shiva. The twelve jyothirlinga are Somnath in Gujarat, Mallikarjuna at Srisailam in Andhra Pradesh, Mahakaleswar at Ujjain in Madhya Pradesh, Omkareshwar in Madhya Pradesh, Kedarnath in Uttarakhand, Bhimashankar in Maharashtra, Viswanath at Varanasi in Uttar Pradesh, Triambakeshwar in Maharashtra, Baidyanath at Deoghar in Jharkhand, Nageswar at Dwarka in Gujarat, Rameshwar at Rameswaram in Tamil Nadu and Grishneshwar at Aurangabad in Maharashtra.