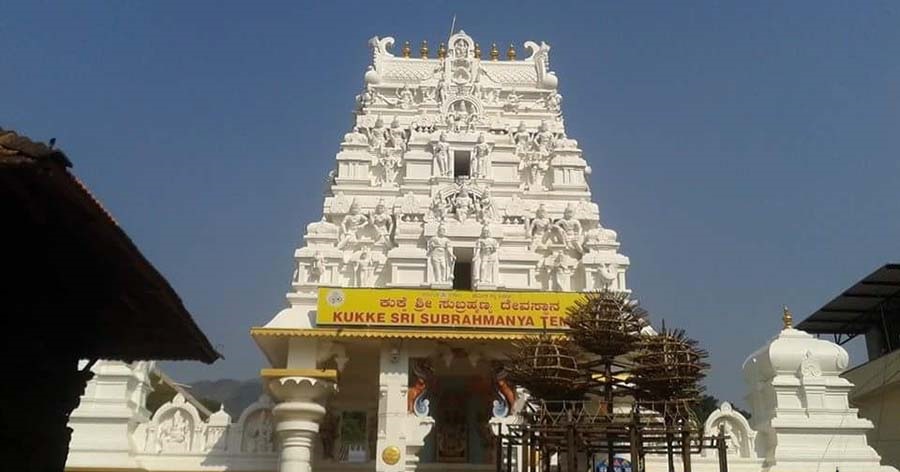 Kukke Lapped in the luxurious abundance of the beauty of the nature the village of Subramanya lies in the Sullia Taluk in Dakshina Kannada with a sancity which very few places can boast of. The temple is situated in the heart of the village. Nature reveals herself in all her unhidden beauty in the rivers, forests and mountains which the temples is surrounded by. It is about a 105 km from Mangalore and can be easily reached by train,buses or taxis.Subramanya used to be called as Kukke Pattana in the past. In the ‘Shankara Vijaya’ Anandagiri observes that Sri Shankaracharya camped here for a few days during his religious expedition (Digvijaya).

Shankaracharya referred to this place as ‘Bhaje Kukke Lingam’ in his ‘Subrahmanya Bhujangaprayata Stotram’.Sri Subrahmanya kshetra has been brilliantly described in the ‘Thirthakshetra Mahimanipurana’ chapter of the Sahyadrikhanda comprised in the Sanatkumara Samhita of Skanda Purana. This kshetra is situated in the banks of the river ‘Dhara’ which originates in the Kumara Mountain and proceeds to the western sea.

Kukke Subramanya (Tulu and Kannada Kukke subrahmaá¹‡ya) is a Hindu templelocated in the village of Subramanya, Karnataka Here Kartikeya is worshipped as Subramanya, lord of all serpents. The epics relate that the divine serpent vasuki and other serpents found refuge under Subramanya when threatened by the Garuda. The Kukke Subramanya Temple is located in the beautiful Western Ghats range of Karnataka. Overlooking the temple is the famous mountain of Kumara Parvatha, a popular hiking destination for trekkers from across South India. Kumara Parvatha forms a picture-perfect backdrop to the temple entrance and the Shesha Parvatha (a mountain shaped like a six-headed mythological serpent, adjacent to Kumara Parvatha) looks like a cobra with its open hood, as if protecting the temple shrine of Lord Subramanya.

The temple is situated on the western slopes of the Ghats and is covered with dense evergreen forests. Pilgrims going to the temple have to cross the Kumaradhara River and take a holy dip in the river before entering the temple for their darshan holy viewing of the Lord. The devotees enter the courtyard from the doorway at the back, and circumambulate the  deity. Between the sanctorum and the  portico  entrance, there is the  Garuda  pillar covered with silver. Devotees circumambulate this pillar. It is believed that this pillar was enchanted and planted there to shield devotees from the poisonous flames arising from the breath of Vasuki, who resides inside. Beyond the pillar is the outer hall, the inner hall, and then the sanctorum of Sri Subrahmanya. At the center of sanctorum is a pedestal. On the upper dais stands the deity of Sri Subrahmanya and the deity of Vasuki and, at a somewhat lower level, the deity of Shesha. Ritual worship is offered to these deities every day.

The temple is slowly increasing in popularity, owing to its religious significance and importance. According to one Mythology, after killing the demon rulers, Tharaka, Shurapadmasura and their followers in a war, Lord Shanmukha reached Kumara parvatha with his brother Ganesh and others. He was received by Indra and his followers. Indra being very happy prayed Lord Kumara swamy to accept and marry his daughter Devasena for which the Lord readily agreed. The divine marriage took place on Margashira shudha shashti at Kumara parvatha. Gods like Brahma, Vishnu, Rudra and many other deities assembled for the marriage and coronation ceremony of Shanmukha for which waters of several holy rivers were brought. With these waters of Mahabhisheka fell down to form a river which was later known by the popular name Kumaradhara.

The great Shiva Bhakta and Serpent king Vasuki was performing tapas for years in the Biladwara caves of Kukke Subrahmanya to avoid the attack of Garuda. Following Lord Shiva`s assurance Shanmuka gave darshan to Vasuki and blessed him that he would stay with his parama bhakta in this place forever. Hence the poojas offered to Vasuki or Nagaraja are nothing but the poojas to Lord Subrahmanya.