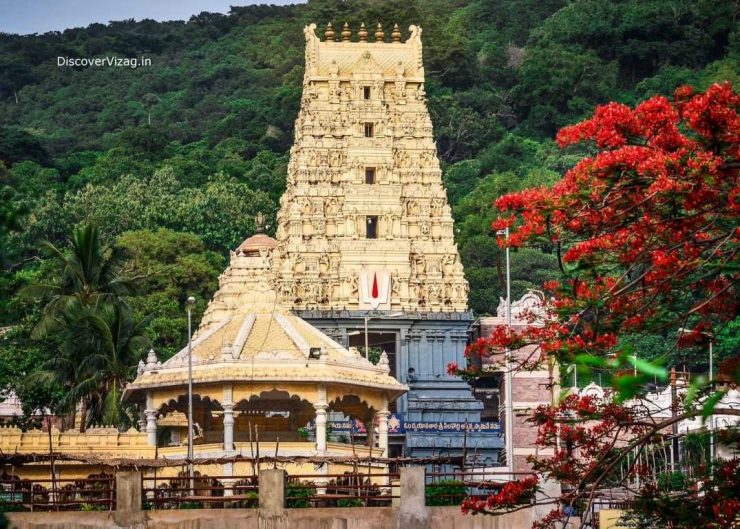 Simhadri or Simhachalam is a Hindu temple located in Vishakhapatnam city suburb of Simhachalam in Andhra Pradesh, India. It is dedicated to Lord Narasimha (the man-lion), an incarnation (avatar) of Lord Vishnu. The central shrine was built in Kalinga architectural style.

“Simha” in Sanskrit means lion; “Adri” or “Achala” in Sanskrit means hill. The temple is located at the top of a hill; hence the temple is called Simhachalam. Sri Varahalakshmi Narasimha Swamy, the lion-man incarnation of Lord Vishnu, is the presiding deity of the temple. The temple is one of the eighteen “Narasimha Kshetras”, the shrines of Lord Narasimha, in India. The deity is usually covered with sandalwood paste year round and can be seen without sandalwood (“nijaroopa darshan” – holy appearance in true form) for only 12 hours per year. On Akshaya Tritiya Day, the deity is recovered with sandalwood paste. The festival of ‘Chandana yatra’ or ‘Chandanotsavam’ falls every year in Vaisakha (May). 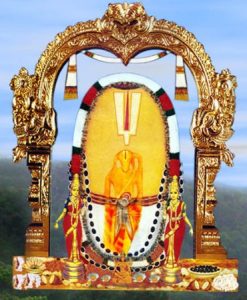 The deity is in the tribhangi posture, with two hands and the head of a lion on a human torso. An inscription dated 1098 AD of the Chola King Kuloththunga provides a clue as to its antiquity. Another inscription names a queen of the Eastern Ganga of Kalinga (ancient Odisha) (1137–1156), while a third inscription says the eastern Ganga King of Odisha, Narasimhadeva II (1279–1306), built the central shrine in 1267. More than 252 inscriptions in Odia and Telugu describe the antecedents of the temple.

Sri Krishna Deva Raya visited the shrine in 1516 and 1519. He offered numerous valuable jewellery, of which an emerald necklace is still in the temple. For the last three centuries the royal family of Vizianagaram, the Pusapati Gajapathis, have been the temple’s trustees. The last King of Vizianagaram Dr.PVG Raju Garu donated Lakhs of acres of land to Simhachalam Devastanam.

Hiranyakasipu was a Rakshasa king and a reincarnation of one of Vishnu’s Dwarapalakas (gatekeepers) in Vaikuntha (heaven). The other palaka was born as his brother Hiranyaaksha. The gatekeepers, Jaya and Vijaya, were cursed by Sanaka, Sanandana, Sanathkumara, and Sanathsujatha because the gatekeepers did not allow these four to take darshan of Mahavishnu. As a result, the gatekeepers were reincarnated three times. Hiranyakasipu decided to perform austerities (tapasya) to appease Lord Brahma, which would allow him to become immortal. However, Lord Brahma said that it was not possible.then Brahma give a boon to hiranyakashaka that was if anybody tries to kill you they must be want to kill you without placing on land.so it must become secret.that’s why he become so dare anybody never kills him. 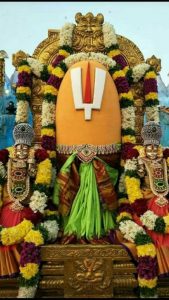 Hiranyakasipu’s son Prahlada was a devotee of Lord Narayana and always expressed his devotion (bhakti) towards him. Hiranyakasipu could not alter Prahlada’s devotion and became infuriated. He made several attempts to have Prahlada killed, including throwing him off a mountain top, putting him in a chamber of snakes and throwing him into a cage of a hungry tiger. Vishnu rescued Prahlada by moving the mountain and creating a small path, burning up the snakes and vanished the tiger. As the avatar Lord Narayana, Vishnu came to rescue Prahlada. When Lord Narayana jumped to save Prahlada, his feet sunk deep into the earth. Therefore, the god’s feet are not shown anywhere at the temple, as it is said that his feet are buried in the earth. The legend says that the Simhachalam temple was built on the exact spot where Vishnu stood to protect Prahlada.

A second legend says that when the Muslims were about to destroy and plunder the temple during an invasion, a poet named Kurmanatha implored Lord Varaha Narasimha to save the temple and the Hindus. In response to these prayers, a huge swarm of copper hornets suddenly appeared and attacked the invading army, driving them out of the city. The swarm then disappeared behind a hillock now known as Tummedala Metta (Tummedala: of hornet; Metta: hillock).

By Road – One can reach Simhachalam from almost any where in Vizag. If you get down at the Waltair Railway Station, you can visit Simhachalam by Bus ( 6A ) or hire a Cab